I was wrong. The shrimp did not die. The day before yesterday I saw all five of them hanging out. Hosanna!

The Ceratophyllum demersum and Egeria densa were dying quicker than they grew. I had to remove them. They are now in a quarantine bucket to see if they can recover at all. I also removed the Java moss. I don’t know if they were dying because of the high temperatures (way over 27 ­°C), allelopathy, or too much light. The temperatures seem to be down to the more acceptable 26 °C now. I also reduced the illumination duration to 10.5 hours plus 4 hours of indirect daylight (what Walstad recommends as a siesta). 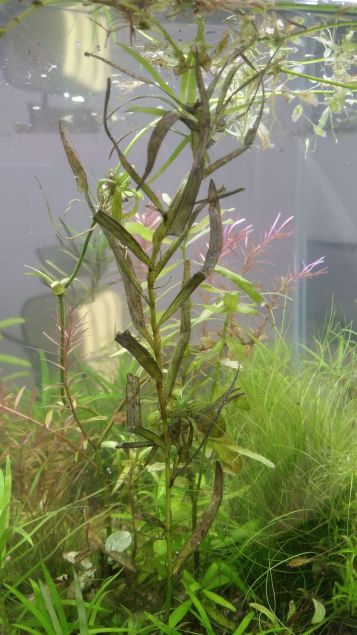 Also I found a some duckweed and other floating plants which I have put in the tank as well. They are doing ok, but are not growing too much. What is growing, however is brown algae and other algae. They are growing so fast that I have to brush them off the leaves every other day and exchange 50% of the water or more.

Tomorrow I’m getting some snails which should help with eating the algae and dead plants.

I decided to add some Snails and Shrimp about one week ago. I took the recommendation of another natural aquarium hobbyist and added several Physa fontinalis, Planorbella duriy, Melanoides tuberculatus, and M. maculata. I also ordered five Shrimp, Neocardidia davidi. To add the shrimp this early was my own decision.

Unfortunately, almost every creature died. I think the Physa fontinalis which live in the soil may be still alive. I think they died because of the extremely high temperatures. The heat wave caused the temperature in the tank to rise to steady 29 °C, some days as high as 31 °C. Of the five shrimp I only saw one yesterday, none today. I think they are all dead now.

I was changing about 40–60% of the water every day or every other day but it did not save them. Several times the water has foul smell of reminiscent of decomposing fish I smelled at the shores of the North Sea and the Baltic Sea.

Once the heat wave is over, I’ll try to repopulate the tank.